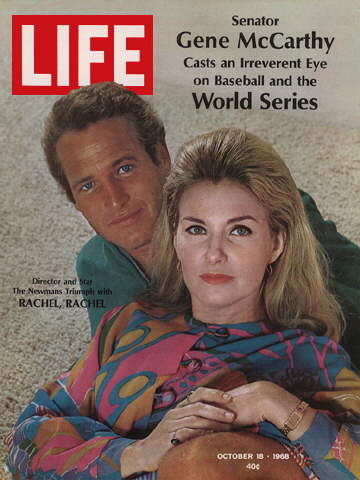 I’m reposting an updated version of something I wrote back in June, when it was first reported that Paul Newman was suffering from cancer. Newman passed away Friday.

Even at the age of 83, Paul Newman was still my favorite bad boy. Unlike James Dean, he stayed alive, and unlike Marlon Brando, he managed to live his life off-screen in an inspiring manner.

He married a class act, Joanne Woodward, and stayed married for 50 years. He started Newman’s Own, the food company that has donated $200 million of its profits to charity, and he funded the Hole in the Wall Gang Camp for terminally ill kids. And the race car driving! Talk about living the life you want.

A cool Aquarius born Jan. 26, 1925, Newman had a Capricorn stellium of Jupiter, Mercury, and Venus on his Ascendant. The combo showed up in his childhood — his father owned a successful sporting (Jupiter) goods store (Cap) and in his movies — ones about the legal system (Jupiter) like The Verdict and ones about racing (Mercury) like Winning, which prompted Newman to take up the sport in real life.

The Jupiterian sports theme was also evident in the aptly named Somebody Up There Likes Me (a boxing film that was supposed to star James Dean until he died), Cat on a Hot Tin Roof (ex-football player), The Hustler (pool), and Slap Shot (hockey).

Because the Jupiter/Mercury/Venus lineup was in Capricorn, Newman continued to work well after he acquired wrinkles and gray hair, a rarity in youth-dominated Hollywood. And, as commenter GianPaul points out, it’s square Mars in Aries, injecting an element of sexy danger.

The Cap lineup opposed Pluto in Cancer in the seventh house of relationships. Here was a very intense guy who forged lasting alliances with both business and romantic partners.

Given that Cancerian (food) emphasis in the seventh house of partnerships, I get a chuckle when I remember Newman’s response when an interviewer asked why he remained married in spite of the temptations that beckon a superstar actor: “I have steak at home, why go out for hamburger?” is what Newman told Playboy magazine.

Underneath the bravado, Newman was sensitive, with a Pisces Moon, which was conjunct Woodward’s Sun. Meanwhile, her Aquarius Moon was on his Sun. They had the classic marriage indicator — Sun/Moon conjunction — going in both directions. In a world where the word “soulmates” gets overused, Newman and Woodward were the real thing.

When I was reading an article about Newman in the September Vanity Fair, I was struck by his description of his relationship with Woodward. “Joanne has a habit of rationalizing [Aquarius], and when she starts that, that’s when I turn ugly! But when she tells me what she instinctively feels [Pisces], I pay very close attention.”

Interesting that the Aquarian gets annoyed when his Aquarius Moon wife starts “rationalizing,” but responds when she expresses her feelings, mirroring his Pisces Moon.

Rather than live in the limelight of Tinseltown, Newman and Woodward escaped to small-town America to raise three daughters — Claire, Elinor (Nell), and Melissa. Newman had two daughters — Susan and Stephanie — from a previous marriage, as well as a son, Scott, who died of an accidental drug overdose in 1978. The residents of Westport, Conn., respected the privacy of their town’s biggest celebrities, according to this poignant story from the Associated Press.

Looking at recent transits to Newman’s chart, his natal Neptune in Leo, which squared Saturn in Scorpio, was being opposed by transiting Neptune, North Node, and Chiron in Aquarius during his fight with cancer.

Jupiter in Capricorn was on Newman’s Ascendant when he died. As we students of astrology know, people leaving the earth often have “happy” transits. Saturn and Pluto show up in the charts of the survivors, usually making aspects to the personal planets or the angles.

My French astropal, Claire Courts at AstroRevolution, has a good analysis of the transits to Newman’s chart when he passed away.

Here’s the chart from AstroDataBank.

I’d be hard-pressed to say which Paul Newman film is my favorite. Certainly, not the classic Seventies buddy flicks he did with Robert Redford, Butch Cassidy and the Sundance Kid and The Sting, though I loved them at the time. Not edgy enough for me. I’ve narrowed it down to Hud, Cool Hand Luke, and The Hustler.

In his later years, I loved the reprise of The Hustler that he did with Tom Cruise, The Color of Money, which won him his sole best actor Oscar.

A special place is reserved for Newman’s collaboration with Woodward in Mr. and Mrs. Bridge, produced by the art film champions Ishmael Merchant and James Ivory. The two play a bourgeois WASP couple from Kansas City who try to keep their marriage on even keel.

I had the pleasure of meeting Newman once at an Indian restaurant that Merchant owned next to the Paris Theatre in New York in the mid-Nineties. Those blue eyes were truly incredible. I’ll never forget them. Ditto for the sly grin when you first spot him across the room, the one that says, “Yeah, it’s me.”

As an old college buddy pointed out when I first posted this riff, Newman was the perfect curmudgeon in the film adaptation of the Richard Russo novel Nobody’s Fool. Filmed in the town where I live, Beacon, N.Y., Fool helped kick-start the revitalization of Main Street after the film studio paid for some refurbishing. Interesting that with this connection between Newman and my hometown, his stellium of Cap planets falls on the cusp of the fourth house, while rules the home.

Millions of children who may not know Newman for his charismatic screen presence probably can recognize his voice. He vivified a Hudson Hornet in Pixar’s Cars. In that animated film, Newman was the voice of Doc Hudson, the mayor in the town of Radiator Springs. Ole Doc has a thing or two to teach whippersnapper Lightning McQueen, whose voice was provided by Owen Wilson.

The slogan for Cool Hand Luke, which was uttered by a prison warden in the film and has since become part of the American lexicon, was: “What we’ve got here is a failure (pronounced “fail-yuh”) to communicate.”

There was never a failure to communicate between Newman and his audiences. Fans got the testosterone-injected message loud and clear. Men wanted to be cool, tough, and later, worldly-wise like him. And women? We all know what women wanted.