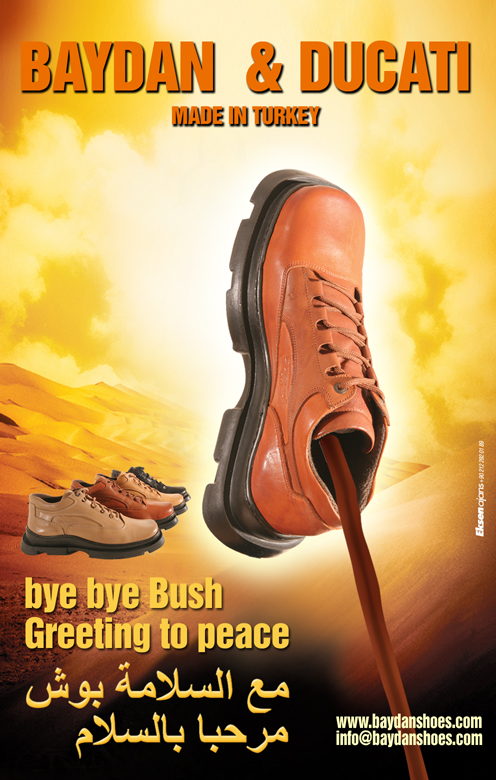 Among the chattering classes, it’s become hip to salute the Iraqi journalist who hurled a pair of shoes at President George W. Bush during a press conference on Dec. 14.

As much as I opposed the invasion of Iraq, where my nephew is now on his way to Mosul, I can’t feel good about a member of the media throwing anything at a person who is conducting a press conference, even if that person is one of the most incompetent Presidents in U.S. history.

The image above has been making the rounds, thanks to Baydan & Ducati, the manufacturer of the shoes that were thrown at Bush. However, I have to say that I’m with Laura Bush. I think this journalist crossed the line.

Did I think that gave his jailers the right to beat him into writing an apology, as his brother alleges? No. But I think reporters should confine their attacks to words.

Laura Bush is a private person, but I know that she’s a force to be reckoned with. Of course she is: Like the previous First Lady, Hillary Clinton, Laura Bush is one tough Scorpio.

I’m not a political animal by any means, but my impression is that Laura Bush has been largely silent during her stay in the White House. The only thing that I can recall her being vocal about is the importance of reading, a subject near and dear to me, by the way, but one that is hardly controversial.

I don’t know who made the executive decision, but the First Lady has suddenly emerged as the point person on the devastating cyclone in Myanmar, the country that used to be called Burma. In between handling the last-minute details on daughter Jenna’s Texas wedding this weekend, she held a press conference at the White House today.

Bush accused Myanmar’s military regime of not doing enough to notify citizens about Cyclone Nargis so they could evacuate. She announced that on May 6 President George W. Bush will award the Congressional Gold Medal to imprisoned Burmese democracy activist Aung San Suu Kyi, a Nobel Laureate. The First lady said the award is a way to “let the people of Burma know that the United States is standing with them.”

In astrology, secondary progressions help us understand how a person’s life unfolds, but I generally look for a strong transit or lunation, especially an eclipse, to thrust someone onto the public stage.

It appears this morning’s New Moon in Taurus occurred quite close to Bush’s Ascendant. It sextiled her compassionate Pisces Moon and formed a T-square with her natal Saturn/Pluto conjunction in Leo and Jupiter/Sun conjunction in Scorpio.

Perhaps the magnitude of the suffering — at least 22,000 dead and a military regime that is dragging its heels in accepting U.S. and other international aid — was too much for her to take. I know she has been an outspoken critic of the country’s junta in the past, but this seems to be her most visible effort to date to support Myanmar’s oppressed people.

I knew Laura Bush was more than a mousy librarian. But I wonder whose decision it was to put her front and center at a time when America’s international image has been sullied by the war in Iraq, the use of torture in interrogating terrorist suspects, and an arrogant, ignorant attitude toward global warming, to name just a few of our black eyes.

I’m happy to see Laura taking the lead, but I can’t help wondering why her husband isn’t up there. Maybe it’s difficult for him to talk about anything without smirking and making jokes. Who knows? Maybe Laura Bush is taking control. I hope so. I trust her judgment a helluva lot more than her husband’s.