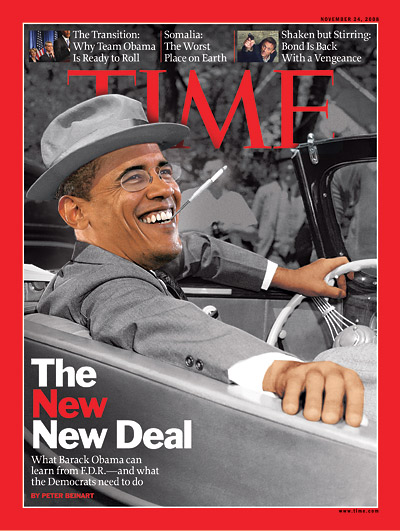 This isn’t the time to discuss the relative merits of FDR’s New Deal and fears of another Great Depression in this country. There will be plenty of time for that after the Inauguration. What strikes me about this caricature of Barack Obama as FDR on the cover of this week’s Time magazine is that he’s wearing a hat.

President John F. Kennedy sounded the death knell for hatmakers by not wearing one during his Inaugural address in 1961. What if Barack shows up wearing a topper on Jan. 20? Happy Hat Days could be here again. Hats off to a hat revival, I say!

I don’t remember being there, but my parents told me that they took me to President John F. Kennedy’s famous speech in Berlin on June 26, 1963. At that point in time, Berlin was on the front lines of the Cold War between the U.S. and the USSR, and Kennedy sought to reassure Berliners by declaring, “Ich bin ein Berliner.”

Typical American, he didn’t get it quite right. Instead of saying, “I am a Berliner,” he ended up declaring, “I am a jelly doughnut” in German. The mistake was the extraneous “ein.”

Like JFK, “Ich bin Berliner.” I was born in Berlin in January, 1960. So I can’t help getting a little misty-eyed about the prospect of Barack Obama’s speech in Berlin tonight. I looked at the ephemeris to see what, if any, connections exist between tonight’s speech and Kennedy’s remarks.

Before I get to that, I want to mention that Barack Obama was born Aug. 4, 1961, nine days before the Berlin Wall began going up to divide East and West. Interesting, eh? There’s something about Obama that feels so early Sixties to me, especially the gray suits that he has been sporting on the campaign trail.

Of course, astrologers believe that we carry the imprint of the moment when we were born. Does that mean I’m going to wear an “I Like Ike” button to work tomorrow? (When I was born, Dwight D. Eisenhower was still in the White House). No, but I’ve always had an appreciation of the dangers of the “military-industrial complex” that Ike, a retired general, warned us about.

Back to Obama, JFK, and Berlin. The only real connection I can find between the aspects of the two speeches (I haven’t run charts because I don’t have exact times for either in front of me), is that today’s transiting Neptune and North Node are on the Saturn in Aquarius of the JFK speech.

Reinhold Ebertin in The Combination of Stellar Influences says Neptune/Node can be “the inclination to expect more than is possible from a community or from an association of people.” Interestingly, today’s headlines say that “Obama will ask more of Europe.”

The Saturn, which comes from the Kennedy speech, becomes the midpoint of the transiting Neptune/Node in Aquarius, and it’s not a happy picture: “The demonstration of emotional inhibitions when in contact with others.” Perhaps the speech will not be as well-received as Obama and his supporters hope it will.

Another intepretation of these three planets in combination offered by Ebertin is: “Disadvantages…through associations with others.” Maybe it’s not in Obama’s best interest to invite comparisons between himself and JFK. Just a thought.

P.S. I’m not the only astrologer who was captivated by Obama in Berlin. Jude over at Jude’s Threshold posted on the speech here. So did AstroTableTalk, though his comparisons were to Hitler, not Kennedy. Check out his ominous post.